Dynamics of the Central Andean orogenic belt: a field-based test of the Cordilleran cyclicity model in southern Bolivia 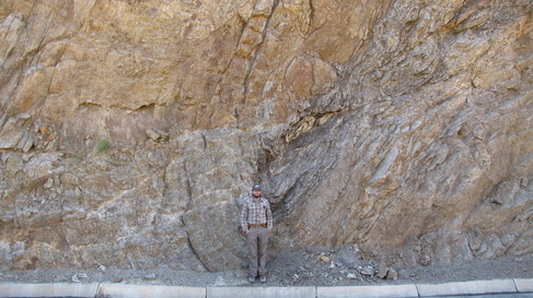 This project is the major focus of my PhD research under the advisement of Sean Long.

In ocean-continent collisional orogens, the first-order processes that occur in the overriding include: arc magmatism, large scale crustal shortening in the retroarc thrust belt, foreland basin sedimentation, surface uplift and local extension in the hinterland, and build up and gravitational foundering of dense eclogite bodies in the upper mantle beneath the magmatic arc and hinterland plateau.  The latter of which exerts first-order control on the dynamics of the entire orogenic system.  Models predict removal of a dense arc root would induce a rapid isostatic increase in the hinterland surface elevation, which would result in a change in regional surface slope in the retroarc region, which alters the wedge taper angle of the retroarc thrust belt.  These responses culminate in predicted increase in forward propagation rates of the thrust belt to maintain critical taper accompanied by migration of the flexural wave and foreland depocent, which we can test in the field!

Our project in southern Bolivia is a collaboration with Dr. Brian Horton and his PhD student Amanda Calle at UT Austin.  Our share of work on this project is focused on the kinematics, geometry, minimum shortening estimates, and timing of the Andean fold-thrust belt in southeastern Bolivia.  Amanda and Brian are focused the migration of the foreland depocenter.  The tools we use on this project are detailed geologic mapping, balanced and restored cross-sections, and thermochronology to date exhumation.  We are using Dr. Daniel Stockli's (U-Th)/He lab at UT Austin.

The majority of hydrocarbon resources in Bolivia are hosted within Carboniferous rocks in the eastern part of the Andean fold-thrust belt and the Chaco foreland basin.  It has previously been suggested on the basis of structural/stratigraphic relationships that these Carboniferous rocks were likely deposited in a foreland basin system that subsided as sediment eroded off a pre-Andean orogenic high.  One proposed highland from which this sediment may have been derived is the present day Eastern Cordillera of southern Bolivia, where deeply-exhumed, low-grade metamorphic Ordovician sedimentary rocks are unconformably overlain by undeformed Mesozoic rocks.  K-Ar ages of synkinematic illite in these Ordovician rocks indicate that metamorphism occurred in the late Carboniferous (310-290 Ma); however, the timing of their exhumation is presently unconstrained.  Our objective is to constrain the timing of this pre-Andean erosion event, and to see how it relates temporally to deposition of Carboniferous hydrocarbon host rocks.  Ongoing mapping and balanced cross-sections in the Subandean and Interandean zones will be extended westward into the Eastern Cordillera.  Raman spectroscopy on carbonaceous material (RSCM) and zircon (U-Th)/He dating will be utilized to determine peak metamorphic temperatures and exhumation timing of Ordovician rocks in the Eastern Cordillera, and detrital (U-Th)/He zircon thermochronology will be performed on Carboniferous rocks from the Interandean and sub-Andean zones.  We predict that if a regional pre-Andean erosional event in the Eastern Cordillera was the source of Carboniferous rocks in the Interandean and Subandean zones, then detrital thermochronologic ages from Carboniferous rocks should match the Ordovician bedrock cooling ages.

The structural controls of geothermal systems in the basin and range, western u.s.

The focus of my master thesis (with Dr. Jim Faulds) was characterizing the structural controls of a "blind" (or hidden) geothermal system on the Pyramid Lake Paiute Tribe Reservation in northwest Nevada.  The Emerson Pass geothermal system resides adjacent to a broad left step between the Lake Range and Fox Range faults, one of the most common structural controls of geothermal systems in the Basin and Range.  In detail however, the geothermal system resides at the intersection of two southward terminating, oppositely dipping normal faults.  Detailed structural and kinematic analysis reveals an interesting story of Cenozoic stress perturbations within a step over, how faults grow and link through time, and a pre-existing structural fabric that appears to have had an influence on geothermal activity and orientation of structures within the step-over.  A peer reviewed paper on this project is in the works that has new data not included in the GRC paper or thesis.  Stay tuned!
Powered by